Snowy Owls are back in Alberta

The magnificent Snowy Owls are back in Alberta! Actually, they’ve been back for several weeks, but I try to let them get settled and get their strength back after their migration down from the high arctic. It also lets them get used to cars passing by their perches on telegraph posts. As ever, I consulted the excellent e-bird website and used the BirdsEye app to see where the most recent sightings had been. Once again, it looks like the owls have had a great breeding season, and there are many to the east of Calgary. I travelled around Nightingale and Irricana on various back roads and found lots of owls, as you can see below: A Perfect PerchA Snowy Owl finds the prefect perch by some woods near Nightingale, Alberta. ObservantA snowy owl knows all that happens around her near Irricana, Alberta. FocusA Snowy Owl keeps a beady eye on the neighbourhood near Irricana, Alberta. One youngster was beautifully perched high up in a tree, with a commanding view all around the prairie. As I watched her for a while I realized she was leaving her perch and grabbing tufts of grass in her claws and then flying back to her perch, on a fairly regular basis. Sometimes she would land on the ground too. At first I thought she was hunting, but in the few hours I observed her, she never caught anything. She was either practicing, or not a very good hunter! Towards dusk she did miss landing on her perch and had to fly around again. Given she only had a few black marks on her feathers, she was very young and maybe inexperienced. Hopefully she’ll get the hang of it and have a long and fruitful life, coming back to Alberta for many years to come. For me, it was pretty special, as normally the owls are on telegraph poles and if you get too close they naturally fly away. If that happens, I leave them be, but I have seen others chase them from pole to pole, trying to get that perfect shot, which must be tiring for the birds and is interfering with their hunting. That’s what made today’s encounter so special, I could spend a lot of time with the owl, knowing I wasn’t interfering with her behavior. Magical. 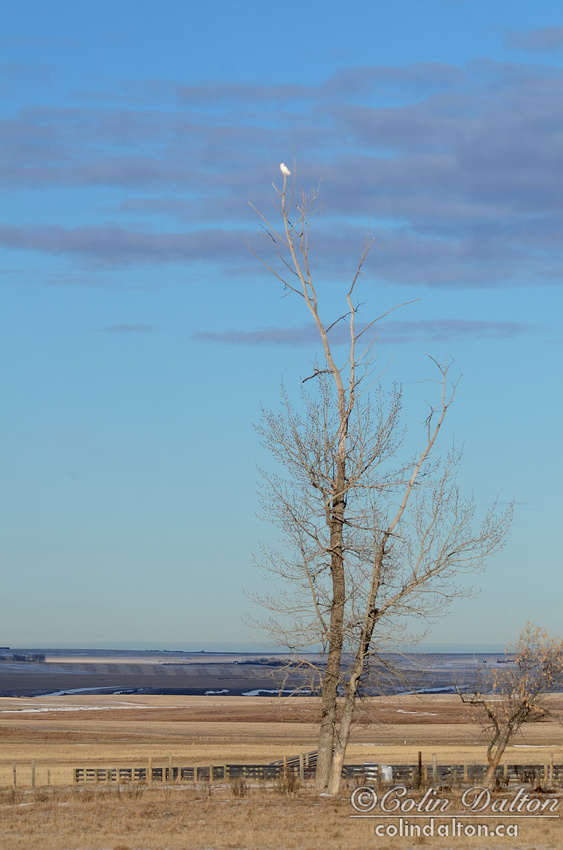 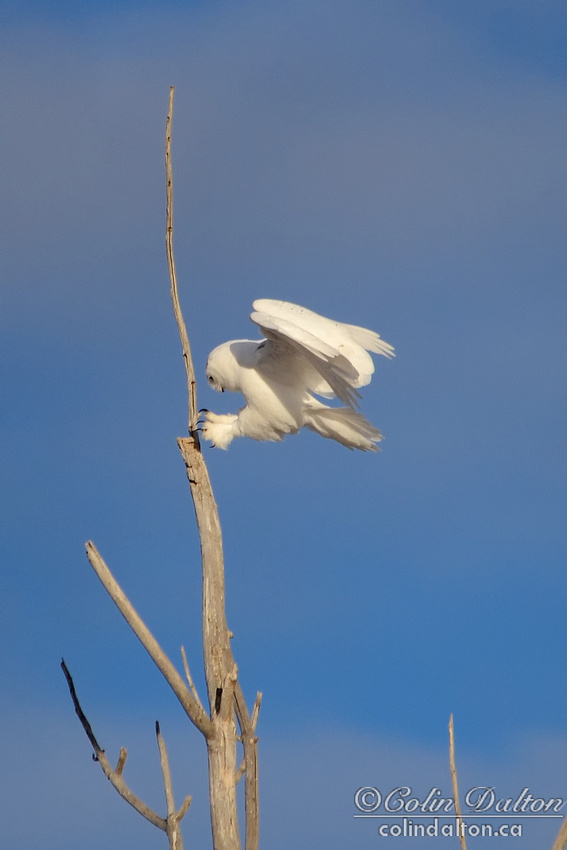 Claws!A Snowy owl gets ready to grab her perch near Nightingale, Alberta. LandingA snowy owl prepares for touchdown on the prairie near Nightingale, Alberta.

Take OffA snowy owl takes off from the prairie, near Nightingale, Alberta.

On the drive back I had a surprise on the side of the road. A prairie falcon with a kill! I managed to get a quick, high ISO shot as it was dusk, but that was an added bonus to the day, as was the sunset.